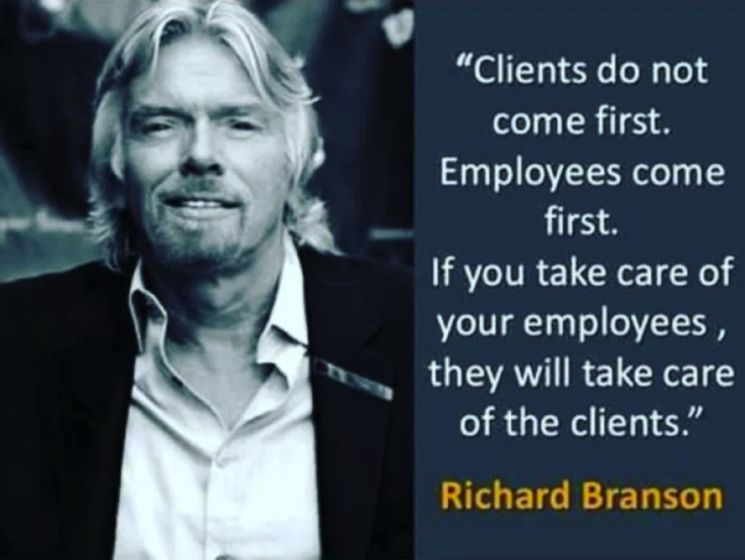 It’s no secret that Sir Richard Charles Nicholas Branson – an English business magnate, investor, and philanthropist – is a great boss and leader. He founded the Virgin Group, which controls more than 400 companies.

Branson’s theory? There’s no better salesperson than one who loves their job and sings its praises. In a reversal of common business thinking where customers come first, Branson has built a profitable empire by employees come first. His reasoning is simple – treat employees badly and they, in turn, will treat customers badly, tarnishing the brand and ruining a potential sale.

Branson says, “By putting the employee first, the customer effectively comes first by default, and in the end, the shareholder comes first by default as well.” Oh, Sir Richard Branson, if only we could clone you and put you at the helm of every business in the world. Employee disengagement would no longer be a global epidemic and the lives of billions of people would improve, as being miserable at work wreaks havoc on employees, their friends, their family members, and even people they do not know.

Being disengaged at work has a ripple effect far beyond decreased productivity, customer satisfaction, creativity, and company profitability. As human beings, we are all energy and we are all connected. What does it mean to all be connected? It means we are all ‘affected’ by each other, even by people we do not know or have yet to meet.

For example: If you live on a remote island with only 60 people, when something happens on the island, say a bad feeling between people, it trickles through and affects the mood of everyone. And that negative energy is also cast out, affecting people who are not physically on the island.

Globally, 87 percent of employees are disengaged, which means billions of people are casting negative energy toward other employees and the world. While this may sound dramatic, it’s not – it’s the truth, as long as your believe in Quantum Mechanics.

BE AWESOME! I’m speaking all around the United States this year and in Malaysia in August at the Asia HRD Congress 2017. Join me live at an event and learn how to re-engage your most valuable asset. In addition to catapulting productivity, customer satisfaction, retention and profitability, you’ll be doing your share to create a world where positivity flourishes.